The People of Pern

The People of Pern is a companion book for the series Dragonriders of Pern. It's created by Robin Wood (artist) with Anne McCaffrey. Was first published by The Donning Company in October 1988.

The People of Pern is a collection of portraits of the many characters which appear in the early Pern novels. Characters from Dragonflight, Dragonquest, The White Dragon, Moreta, and the Harper Hall Trilogy (Dragonsong, Dragonsinger and Dragondrums) are depicted.

The text which accompanies the artwork is by Anne McCaffrey and, in some cases, provides amplifying information which is not contained with the Pern novels.

The artist, Robin Wood has graciously granted us permission to use her artwork here on the Pern Wiki.

¹ — Indicates the character is painted against a background, as opposed to merely being a sketching. 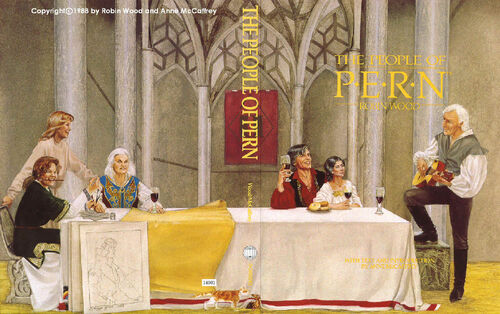 The full cover includes portraits of Lessa, F'lar, and Robinton on the front side, as well as portraits of Robin Wood and Anne McCaffrey on the back side.
1988 (The Donning Company). Cover by Robin Wood
Add a photo to this gallery

Retrieved from "https://pern.fandom.com/wiki/The_People_of_Pern?oldid=26039"
Community content is available under CC-BY-SA unless otherwise noted.