The Atlas of Pern

The Atlas of Pern is a companion book for the series Dragonriders of Pern. It was created by Karen Wynn Fonstad. It was first published by Del Rey / Ballantine in November 1988.

The atlas is a large-format book comprising regional maps, chronologies for the seven published novels, local maps and drawings of «Hall, Hold, and Weyr», thematic maps on a world scale, and notes. The Notes are page references to the canon, a list of reference works, and an index of place names.

Anne McCaffrey wrote in her «Welcome» that she had received in November 1983 «the first of Karen's renditions of my Pern, which rendered clearly what had been partially obscured by a myopic mind's eye: this is Pern!… all lifted from the depths of my imagination and captured by Karen's draftsmanship and geographical expertise…».

This book covers Pern as it appears in the Sixth Pass and the Ninth Pass, based off the material that had been published at that time (in chronological order):

As a result of this, the maps in this do not include locations introduced or described in later books, such as Monaco Bay Weyr or ancient stake holds (with the exception of Landing, referred to as «The Ancients' Plateau Hold»).

In addition to maps (both political and physical), The Atlas Of Pern also includes floor plans and cross-sections of building layouts, and other diagrams (such as the layout of a dragon's wing, or the route taken by F'lar and T'ron in their duel at Telgar Hold). The beginning of each section also contains a day-by-day timeline of events that occurred in that story.

The Atlas of Pern is now out of print, and it is unlikely that an updated version will be produced, although plans for one did exist at some point (see below). 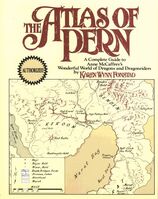 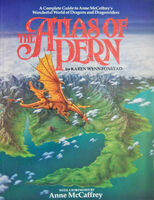 As mentioned here, it is known that plans did exist for an update to the Atlas of Pern that would have detailed places from the following books:

The proposed update would have included revisions to existing maps, as well as a number of new maps:

Retrieved from "https://pern.fandom.com/wiki/The_Atlas_of_Pern?oldid=28526"
Community content is available under CC-BY-SA unless otherwise noted.