Ruth was a white dragon, unique among his species, whose rider was Lord Jaxom of Ruatha Hold. Ruth was capable of traveling to any When in time, and fire lizards obeyed him. Due to his small size, he was often the victim of ridicule.

Ruth was the only white dragon mentioned anywhere in the Pern novels. He was not an albino, as his hide contained very faint patches of all the normal dragon colors, visible on close examination when Ruth was very clean.

When Jaxom was young, Lord Warder Lytol took him to the Benden Weyr hatching of Ramoth's clutch. Before the hatching began, Jaxom and Felessan went to take a peek at the eggs. While there, Jaxom noticed a grey egg smaller than all the rest. Since Jaxom felt sorry for the little egg, he gave it a pat.

At the hatching, the little egg did not hatch at first. When Jaxom saw that it was rocking, he leapt down to the sands to help the dragonet break through the unusually tough shell. After he used his belt knife to cut through the membrane, a white dragon tumbled out - less than half the size of its clutch-mates - then Impressed Jaxom. The dragon told Jaxom that his name was Ruth.

At the time of Ruth's hatching, there was disagreement over what would happen to the newly Impressed pair. It was a commonly held belief among the Pernese that, whatever plans had been made for the future, they must be cancelled in favour of the Weyrs'. However, the lack of a Lord Holder at Ruatha Hold had nearly caused all-out war, which eventually ended with Jaxom's birth and the death of his father Fax. Lords Raid of Benden and Sifer of Bitra contended that Jaxom should yield lordship of Ruatha, while Masterharper Robinton and Lord Warder Lytol maintained that Jaxom should remain at Ruatha. Lord Lytol, defending Jaxom's actions, and certain that Ruth's days were numbered, stated that Jaxom should stay where his obligations would give meaning to his life after Ruth died. The Masterharper and Lord Lytol prevailed and both Ruth and Jaxom were removed to Ruatha, where they prospered.

Ruth stayed in his own personal weyr at Ruatha Hold and, despite most expectations, grew to adult size … at least for him. He remained very small compared to his clutchmates and other dragons and it was not certain that he would ever be able to fly. When he finally did fly, Weyrleader F'lar examined Ruth's wings for size and strength, then declared that Ruth did have a proper wing-to-body size ratio. Ruth surprised all in attendance with a very quick vertical lift-off and proved to be an excellent flyer, having great speed. Ruth's smaller size, rather than being a hindrance, allowed him to be nimble and agile in the air, allowing what was commonly described as being able to «turn on his own tail» and what the ancient humans of Earth referred to as «turning on a dime».

While Jaxom and Ruth were attending a training session at a weyr, a mating flight took place. Despite being sexually mature, Ruth displayed absolutely no interest in competing with other males, while Jaxom himself was affected. Indeed, the very concept of having a mating urge appeared to puzzle Ruth. He was sometimes affectionately teased about it by Jaxom and others. When asked what he thought about chasing females, what he considered to be only a race, his general reaction was summed up as «… but why would I want to?» Jaxom eventually summed up Ruth's lack of a mating urge by explaining that Ruth was a 'sport'. In a biological sense, this happened when an organism or part showed an unusual or singular deviation from the normal or parent type; or, in other words, a mutation.

Ruth was not only different physically, but mentally as well. He was an unusually intelligent member of a fully sentient species, having greater memory and being able to grasp concepts much more easily than other dragons. F'lessan's bronze Golanth once noted that Ruth was one of the dragons who would listen in on Jaxom's lessons with AIVAS. Ruth's opinion appeared to be well regarded by other dragons. His intelligence also allowed him to easily orient himself during time travel.

Just as Jaxom had unique circumstances that affected his life, Ruth's birth, small size, and having a Lord Holder-in-training for a Rider, affected him. Ruth grew up at Ruatha Hold, not at a weyr as all other dragons had for centuries. As a result, Ruth became more independant and was occasionally more impulsive that the usual dragon, having not been raised in a weyr-established lifestyle. Lytol thought that Jaxom's cautiousness gave balance to the pair.

Because of his smaller size, fire-lizards were often fascinated with Ruth. Ruth explained that they liked him because they did not have to be so far away in order to see him in his entirety. He would oftentimes be swarmed by them when he went for a bath because they wanted to help scrub him where he itched. It was soon discovered that, when Ruth told fire-lizards to do something, they would do it immediately, whether they were wild or not.

As with all dragons, Ruth was well regarded by other dragons. Greens especially respected him, even when they wouldn't listen to their own riders. He was on good terms with his parents, Ramoth and Mnementh, and often mentioned that his mother liked to boss him around.

It seems likely that white coloration in dragons is normally a lethal mutation, as it is tradition to not assist dragonets who can't hatch on their own. It also appears that a white dragonet is unable to break out of its own egg, perhaps due to either inadequate strength of the dragonet or the unusually tough shell of a white's egg, such as Ruth's had, or a combination of both. Although his mother was the largest queen (Ramoth) and his father the largest bronze (Mnementh) in the history of Pern, Ruth was smaller than even a normal green dragon of his time. He was only slightly larger than the largest dragons of the first generation. While his exact length was never specifically mentioned in the books, it does state that he stood higher than a runnerbeast (horse) at the shoulder. Extrapolations suggest that he might have been eighteen feet long. He was male, or neuter undetermined, and assumed to be sterile, with no urge to mate. 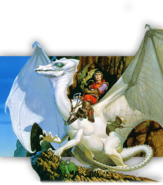 Ruth on the main theme of the Dragonriders of Pern wikia