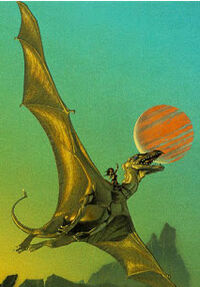 Queen dragons, also referred to as Gold dragons, are the dominant females of the dragon species. Queens are, in general, imperious, demanding, quick to anger, and easily riled up.

Queen dragons are the largest of all colors of dragon, but are also the rarest, making up approximately 1% of the population. A queen's coloring can be any shade of gold, which can change according to the queen's state. A queen's color often becomes brighter during mating,or pregnancy. Queens are the dominant females of the dragon species, and any other dragon will obey the orders of a queen even against the will of their own riders. Queens dragons will only impress women, and appear to have a preference for women born outside of the weyrs. An egg that will hatch a queen dragon is especially noticeable, being larger in size and having a distinct golden color. As the largest size of dragon, queens have impressive stamina, with only bronze dragons being able to keep up with them in flight.

Reproduction occurs during a mating flight, where a queen is pursued by one or more bronze dragons, the only males with the necessary stamina to keep up during a flight. Mating occurs on a regular basis, more often just before or during a pass, less often during an interval. Queens typically rise for the first time shortly after reaching maturity at two years of age. An aging queen however, will eventually stop rising to mate, though the exact time is undefined. The onset of estrus is marked by a sudden change in temperament and a sudden hunting of prey by the queen in question. Weyrwomen are encouraged to have their queens blood their kills for a quick burst of energy. Gorging is discouraged and is believed to result in smaller clutches. The queen mates with whichever bronze manages to catch her during a flight. In the event of a senior queen rising, the rider of the winning bronze becomes Weyrleader. It is tradition that all other queens in a weyr leave when another queen rises to mate. The emotion involved can induce other queens to rise, and can result in a fight to the death between the two.

Following the mating flight, queens have a short pregnancy, after which they will lay eggs in Weyr's Hatching Ground. When laying eggs, Queens are known to have a strong maternal instinct and will protect the eggs from any perceived threat. This instinct is the only known exception to a dragon's urge to suicide at the death of their riders; the queen will remain just long enough for the eggs to mature and hatch before suiciding.

Role in the Weyr

Within a Weyr, Queen dragons serves as leaders along side Bronze dragons, and are responsible for the continuation of the species. Because any dragon will obey the order of a queen, all queen dragons and their riders are expected to serve in leadership positions regardless of actual status. Typically, a healthy Weyr has multiple queens. One queen serves as senior queen, while their rider is Senior Weyrwoman, though there can be multiple junior queens. A lack of queens not only causes difficulties in keeping a Weyr populated, but can result in inbreeding due to the reduced population. A queen's rider as well as the Weyrleader has the ability to call for an open mating flight, allowing male dragons from other Weyr's to participate in the mating flight. The queen and Weyrwoman then have the option of transferring to the winning rider's Weyr.

The mating flight of a senior queen is of particular importance due to its influence on Weyr Leadership; a Weyr's Weyrleader is the rider of the dragon that flies the queen. Meanwhile, Weyrwomen step down when their queen ceases to rise for mating flights. The replacement Weyrwoman will be chosen by one of two methods. Either the most senior of the junior Weyrwomen are promoted or the new Weyrwoman will be the rider of the next queen to rise to mate.

Because queens do not ingest firestone, they are unable to flame thread and so do not fly with the fighting wings. Instead, they fly in special "Queen's Wings", which fly at low altitude with their riders bearing flamethrowers to char any missed thread from above. This practice was forgotten during the Eighth Interval, which saw the number of queens decrease until there was only one living queen at any time. Queen's wings were reintroduced in the Ninth Pass, which saw the return of the five missing Weyrs.

Retrieved from "https://pern.fandom.com/wiki/Queen?oldid=23152"
Community content is available under CC-BY-SA unless otherwise noted.