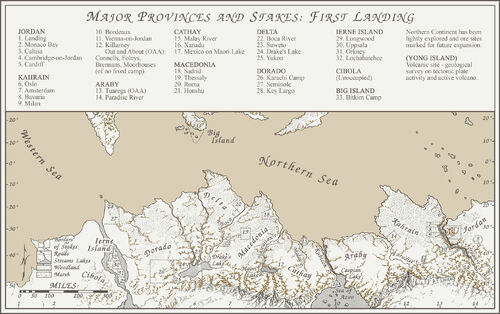 The easternmost of the Ancient Provinces, Jordan took its name from the Jordan River, which made up the western border with Kahrain Province. All of the stakes were built along or near the river. The eastern regions of Jordan remained unsettled when the province was abandoned.

A hydroelectric power station and dam also existed at an unknown location along the Jordan River.

Araby's appearance is known to have changed many times over the years; having «sparse ground cover» when first surveyed, changing some two hundred years later to a forested and waterlogged site, finally becoming a stony waste by the Ninth Pass. The majority of Araby Province is believed to have been alloted to several families of Tuareg ethnicity, who, like several other groups on Pern (the Romanies, and the Brennan, Foley and Moorhouse families of Kahrain Province) had no intention of setting up stakes; instead preferring to live a nomadic life and travel from camp site to camp site.

Macedonia Province was the longest surviving province on the southern continent; even after Thessaly and Roma Stakes were abandoned by their owners, Stev Kimmer and Ito Fusaiyuki's family remained at their home in Honshu, outlasting the other settlements in the south which were gradually abandoned over time. In the end, they believed they were the only survivors, and were ultimately rescued and transported off Pern by a spaceship that retrieved the distress beacon sent by Ted Tubberman.

Retrieved from "https://pern.fandom.com/wiki/List_of_Stakes?oldid=16560"
Community content is available under CC-BY-SA unless otherwise noted.