Get Off the Unicorn

Harper Hall Trilogy (also The Harper Hall of Pern, Harper Hall) is a collection of the 3 novels of the Dragonriders of Pern series written by Anne McCaffrey. It was first published by Nelson Doubleday in July 1984.

Here we meet Menolly as she navigates her way as the first journeywoman Harper in the history of Pern; and fellow student Piemur whom is secretly asked to leave Harper Hall, drafted by Masterharper Robinton to embark on a dangerous mission to the Southern Hold. 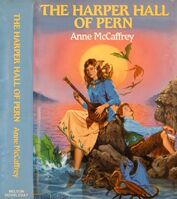