Pern had a wide variety of plant life; but, when the colonists came, they also brought their own food. Following is a list of the variety of plants found on Pern. It should be noted that, since most of the native plants grew bigger, they were more useful on the Southern Continent. 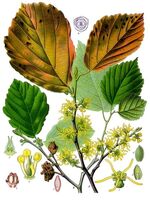 Retrieved from "https://pern.fandom.com/wiki/Flora_of_Pern?oldid=28063"
Community content is available under CC-BY-SA unless otherwise noted.