Bubbly pies are the Pernese version of fruit pies, so named for the way in which the fillings bubble when hot. Each hold has its own recipe for the pies, and they are a mainstay at Gathers and other events where they are the favorite of many Pernese, including Masterharper Robinton and Piemur.[1]

The traditional fruit used in bubbly pies is blueberries descended from Terran stock, but any berry can be substituted to taste. There are several variations using the same ingredients in different configurations: large fruit pies, dessert tarts, and small turnover-like Gather pies.

Cut the butter into chunks. Combine the dry ingredients in a bowl. Work the butter gently into the dry mixture with a fork until pieces the size of peas form. Sprinkle the water over and work it in. (Do not overwork the dough.) Form the dough into a ball.

Gently toss blueberries with sweetening and klah bark in a large bowl. Sprinkle citrus juice over mixture. Spoon berries into crust and dot with butter.

Divide the dough into two pieces. Work with one at a time. Form each into a ball and press out into a circle. Divide each circle into six. Roll each piece into a ball. Flatten to 1/8-inch, cut into 5-inch circles, and fit six into the tart pans. Fill with berry mixture. Moisten the edge of each tart and top with second circle of dough. Seal and flute the edges. Cut slits in the top of each tart with a knife. Cover edge of each tart with foil.

Bake at 375°F for ten minutes. Remove foil. Bake for 8-12 minutes more, or until crust is golden. Serve hot.

Roll out dough on a floured surface to 1/8 inch thickness. Using a 3-inch cookie cutter, cut out 24 circles. Lay out 12 on a lightly greased cookie sheet. Divide filling among circles, spooning approximately 2-3 tablespoons into the center of each, leaving a 1/4-inch border.

Brush the border with egg. Lay the second circle on top of each pie, then press the edges together with a fork all the way around. (Stretch the top crust gently to fit if necessary.) If desired, mix together a 1/4 cup water with 1 1/2 tablespoons sweetening; brush top of each pie with mixture for a sugary glaze. With a knife, cut three of four short slits in the top of each pie. 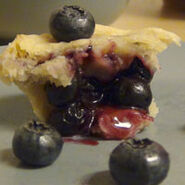 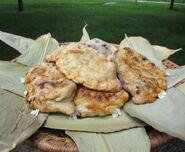 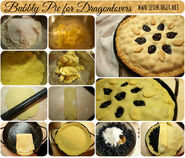 Add a photo to this gallery

Retrieved from "https://pern.fandom.com/wiki/Bubbly_Pies?oldid=15731"
Community content is available under CC-BY-SA unless otherwise noted.